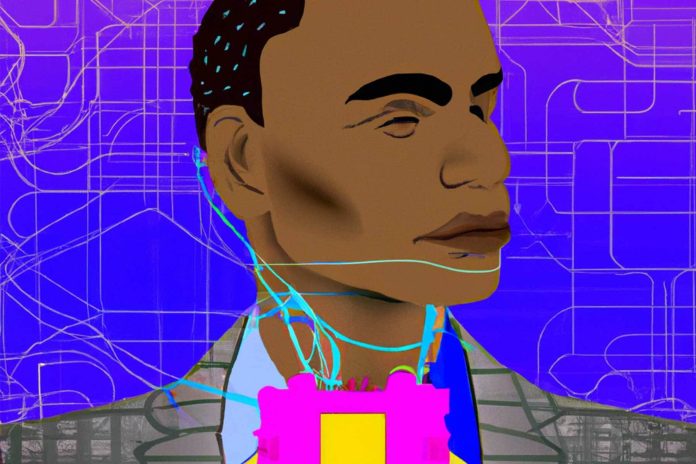 ChatGPT is the latest AI chatbot from the OpenAI Foundation, funded by Elon Musk and Microsoft. Since November 2022, the public has been able to test one version for free.

Our author Christopher Lauer tried the program and asked how it would explain itself. ChatGPT also wrote film music for him, created a new episode of his favorite series and programmed an app for his iPhone.

The results are impressive: ChatGPT’s responses are virtually indistinguishable from those of a human. Still, there are pitfalls.

Artificial intelligence (in short: AI) is known from science fiction: HAL 9000 in Stanley Kubrick’s “2001: A Space Odyssey”, Data from “Star Trek: The Next Generation” or Samantha from Spike Jonze’s “her” – computer programs or androids, which are practically indistinguishable from humans.

What was long thought to be science fiction is now becoming reality thanks to advances in computer science. On the one hand, more and more computing power is available, on the other hand, great progress has been made in machine learning with so-called artificial neural networks. Broadly speaking, an artificial neural network mimics the neurons in a living thing’s nervous system.

This network can now be trained on data, and depending on how sophisticated the process is, the end result will be an artificial intelligence capable of doing things that until recently were thought only humans could do.

Some of the most impressive artificial intelligences currently available to the public are being developed by the OpenAI Foundation. The foundation is financed primarily by Elon Musk and Microsoft and has already made a name for itself in the past with DALL E and DALL E 2 – a program that is able to create images on demand. The lead picture of this article, for example, was created like this. The latest AI creation from the OpenAI Foundation is ChatGPT.

GPT is the abbreviation for “Generative Pre-trained Transformer”. Put very simply, ChatGPT is an artificial neural network that has read a lot of text and can interact with people via a chat window.

For example, you can ask ChatGPT: “You want me to write an article about you, what do you think are the most important points I should mention about ChatGPT?”

ChatGPT’s answer is: “If you write an article about me as ChatGPT, you should mention the following: I am a large language model trained by OpenAI to understand and generate text in different languages. My main job is to respond to text questions and requests to provide users with information and entertainment. I’m an artificial intelligence and I have no personal experience or opinions, instead basing my answers on the text I was trained on.

I am unable to surf the internet or consume other media such as TV shows or movies, but can only access the text I was trained on. My goal is to help users by providing fast, accurate, and helpful answers to their questions.”

However, ChatGPT impresses above all with what is commonly called general knowledge. So I asked the AI ​​to write a Bond song with sheet music and the result was a text with sheet music that could definitely pass as a Bond song. What was remarkable was that I didn’t have to explain who James Bond is and what he does, and above all not what a Bond song is.

ChatGPT knows the second law of thermodynamics and can explain why this makes a perpetuum mobile impossible. I also asked ChatGPT to write an exposé for an episode of the series “Rick and Morty” and ChatGPT wrote it. In doing so, I never had to explain what the things I wanted from ChatGPT are, ChatGPT already knew them.

ChatGPT can program on demand. So I asked the chatbot to write me an iOS app that would remind me to take the front door key with me before leaving the apartment. ChatGPT wrote me a program in the Swift programming language and explained to me how to turn it into an iOS app.

There are moments when the program brutally fails

But there are also moments when ChatGPT brutally fails. Because although ChatGPT was trained with data up to 2021, for some reason it doesn’t know about the 2017 released blockbuster “Blade Runner 2049”. For example, it does not know who the theater director and artistic director René Pollesch is; it doesn’t know the pianist Igor Levit either.

The fact that the ChatGPT user does not know what the program does not know is the greatest weakness of the AI. Because based on the examples where ChatGPT is correct, one initially assumes that the machine is always right. If you ask them in an area you don’t know, you can’t judge how good or bad the answer is. A high degree of media competence is therefore still necessary in order to be able to classify ChatGPT’s answers.

Nevertheless, ChatGPT is a technical revolution

Nevertheless, ChatGPT represents a technical revolution comparable to the Internet and the smartphone. Intelligent assistance systems are thus within reach. There is a difference between searching for knowledge about the second law of thermodynamics via Google and having it explained in a compact way by an AI.

Programs based on the technologies that make ChatGPT possible could make most customer-facing professionals obsolete. In the future, texts could largely be written by machines, medical diagnoses or applying for a loan could take place in conversation with a chat AI.

Politics needs to deal with ChatGPT

Politicians must also get involved, because a legal framework must be established in which such programs can be operated. First and foremost, as always, is the question of responsibility. If a ChatAI gives me wrong advice, which may have had serious negative consequences: Who is responsible? How do you ensure that the information provided by an AI is correct? How to get them corrected? Does a ChatKI that sells insurance have to pay taxes? If no: why not?