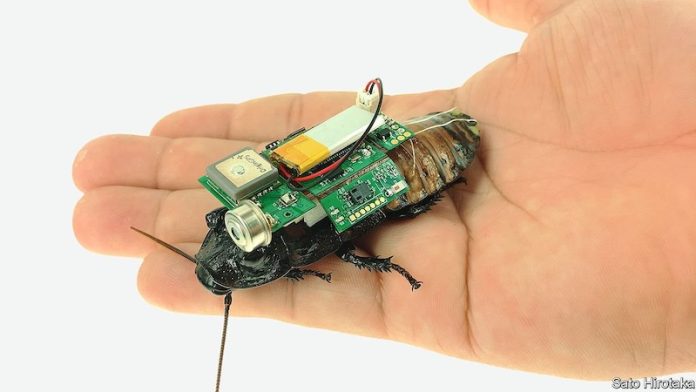 Scientists from Singapore are currently researching autonomous robotic cockroaches that could one day save human lives. The researchers want to put a technology backpack on living cockroaches so that they can search for buried people in collapsed buildings.

For as long as research has existed, people have kept looking at things from nature. No wonder, because nature still knows best what works and what has no future. This is how airplanes, particularly hard-wearing materials and other things that have become indispensable today have already been created.

An insect also repeatedly made it into the work of many researchers. We are talking about the cockroach, an animal that is often said to be indestructible. Rather undesirable in German apartments, the little animal has a lot on the box.

That led, according to the news magazine The Economist In 1997, for example, a researcher at the University of Tokyo created a controllable version for various purposes. The animal was steered to the left or right by means of an antenna.

Cockroaches could come to the rescue of trapped people

A new approach from Singapore is now developing the original idea further. Instead of manually controlling a cockroach remotely, the researchers put a backpack on it. In addition to many sensors, this also contains a camera and a mini-computer. Thanks to an intelligent algorithm, the control should take place completely autonomously.

The researchers’ plan is as follows: The animals, which are around six centimeters long, are released in crisis zones and move through all sorts of cracks and holes.

Signs of life are picked up by a temperature, motion or CO₂ sensor. An AI system should limit and support the search. If the camera and the sensors detect a person, the emergency services are automatically alerted.

Robot cockroaches may be in action soon

So far, the technology has been tested in a simulated disaster zone. To do this, researchers have distributed concrete blocks over 25 square meters. Next to the people there were also other objects, such as microwaves, heating rods or laptops.

The first results were promising. The cockroaches were able to track down humans with their computer backpacks about 87 percent of the time. The technology is now to be further developed and the hit rate optimized. It is currently assumed that the first deployments will be possible in five years.