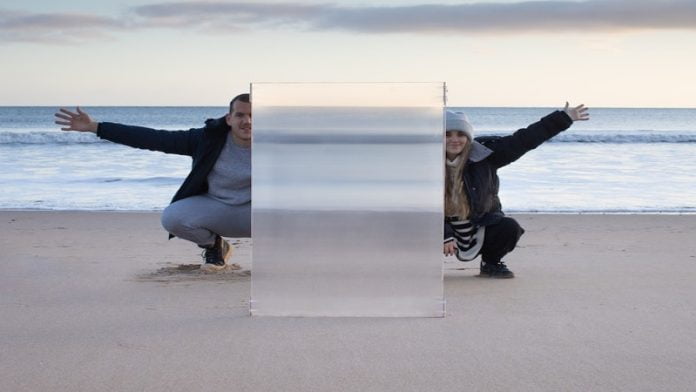 A British start-up claims to have designed a camouflage shield that makes people invisible. The developers are now looking for financial support to complete the project. The backgrounds.

The British start-up Invisibility Shield Co. claims to have invented a camouflage shield that makes you invisible. On the crowd funding website Kickstarter the developers have now started a project to promote camouflage shield production and sell their product worldwide.

According to the Kickstarter project description, the start-up based in London has already produced 25 shields.

The inventors describe the sign as big enough to hide several people. In addition, the camouflage shield is free-standing and portable and does not require a power source. In addition, it only weighs around four kilograms and is made from fully recyclable materials.

How does the camouflage shield work?

Lenses are arranged vertically across the board on each sign, which reflect the light falling on them horizontally. At the same time, the light reflected from the background is much brighter and wider, making it appear as if the object or person is disappearing behind the shield.

In a video, the inventors demonstrate how the camouflage shield works. It can be seen that people who are behind the sign are actually not recognizable or visible.

However, the sign itself still stands out from the real background, as it makes it look slightly blurred. In addition, the surface of the shield appears milky.

“The shields work best against even backgrounds such as foliage, grass, rendered walls, sand, sky, and asphalt,” the developers write on Kickstarter. If the viewer is unaware of the sign’s presence, the trick might well work.

Production out of impatience

If you search for information about the Invisibility Shield on YouTube, you will find many results about the technology. Among numerous test videos and media reports there are also content creators who have tried to produce a corresponding product themselves.

The general mass of reports also inspired the inventors of the camouflage shield. According to their own statements, however, they were disappointed by the stagnation of developments in 2020, so that the Invisibility Shield team felt compelled to produce their own prototype.

The team now offers their camouflage shield in two sizes. It should be available from as little as £50.

Not the first chance to disappear

Back in 2019, various media reported about a Canadian company called Hyperstealth. The company therefore developed an invisibility film. This was initially intended for use in the military or by the police.

Similar to the English shield, there are many lenses next to each other on this invisibility film. These deflect the light in such a way that objects behind the film are enlarged and thus stretched out. As a side effect, this makes objects behind the slide disappear.

Unlike the film from Canada, however, the British camouflage shield is solely intended to hide users from the eyes of others. “The shield surfaces and supports are made of a flexible material. They were not designed to protect you from attacks and would not be useful in such situations,” the team wrote on Kickstarter.

Invisibility for everyone from December 2022

Invisibility Shield had originally envisaged a financing goal of around 6,000 euros. In the meantime, however, more than 650 supporters have already donated more than double the amount.

The reasons should be clear. After all, the motto of Invisibility Shield is “Surprise your friends. Avoid your enemies!”

The right lighting for the pool – what to look out for?

The right lighting for the pool – what to look out...

For a low sodium diet – chopsticks as a substitute for...

What is an .io domain? Importance, advantages and disadvantages