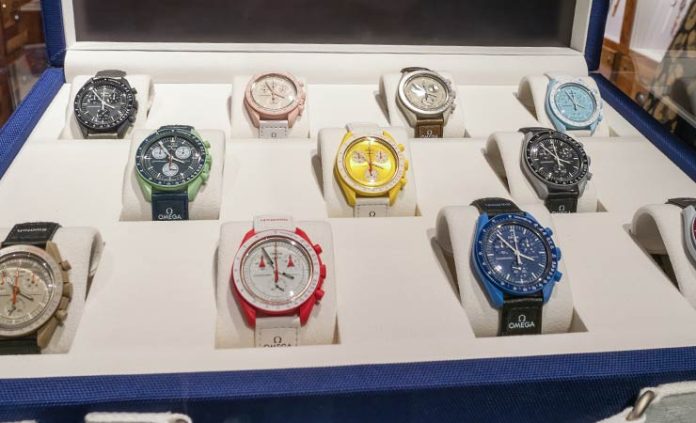 When the Swiss watch manufacturer Swatch was planning to join forces with its subsidiary Omega, it was not foreseeable that the reinterpretation of the Speedmaster Professional Moonwatch would trigger such a hype. At the end of March, sales of the new, so-called Moonswatch, began in the Swatch branches. Watch fans sometimes had to wait more than 15 hours in front of the branch to get hold of a brand on the first day of sale.
A short time later, numerous models were already being auctioned on action portals for prices between 700 and 1200 euros, which had been bought a few hours earlier at the actual selling price of “only” 250 euros.

Why is the Moonswatch so popular?

The new Moonswatch is a visual replica of the legendary Speedmaster Professional Moonwatch. It was the first watch to go into space on October 3rd, 1962. On July 21, 1969, it was the first wristwatch to successfully survive the moon landing. The Speedmaster model was subjected to numerous tests by NASA, in which the watch was exposed to weightlessness, strong magnetic fields, extreme shocks and vibrations as well as large temperature fluctuations from minus 18 to plus 93 degrees. It successfully withstood the tests and even mastered the spacewalk in 1965, during which it was exposed to the pure space conditions without any protection – and yet showed no impairments in its functionality.
Since then, the Speedmaster Professional Moonwatch has been considered the famous moon watch and is part of the astronauts’ standard equipment.

The standard version currently costs around 6600 euros depending on the equipment, the price increases by another 1000 euros.

With the announcement of the optical new edition, which technically has major differences to the real moon watch, the excitement also increased, because the new variant of the luxury watch was announced at a price of 250 euros and should therefore be significantly cheaper than the actual moon watch.

Where are the differences?

Although the Moonwatch and the almost identically named MoonSwatch look confusingly similar, there are significant differences. The case of the new MoonSwatch is made from the in-house ceramic mixture Biocermic, which consists of two-thirds ceramic and one-third plastic based on castor oil. The luxurious predecessor model, on the other hand, is made of stainless steel, sometimes even gold. What is special about the new MoonSwatch, however, are the different colors.
A total of eleven color models are available, each color representing a celestial body of the solar system, which is then also used for the respective model designation. For example, MoonSwatch models dedicated to Jupiter are called “Mission to Jupiter” and are beige in color with a beige and orange dial.

The watch is finally fixed to the wrist with a textile strap and Velcro fastener.

The inner workings of the new MoonSwatch also differ greatly from the original Moonwatch. A mechanical movement is used in the high-priced Speedmaster Professional Moonwatch, while a conventional battery-operated quartz movement was installed in the cloned MoonSwatch.

Is the hype leveling off again?

The Swiss watch manufacturer Swatch can hardly explain the hype surrounding the new MoonSwatch, because it was openly communicated in advance that the watches are not limited edition goods and that sales will soon start in the online shop anyway. Nevertheless, the stocks were used up within a very short time on the first day of sale and the first advertisements for the Swatch MoonSwatch ended up on the Internet. In the meantime, the MoonSwatch models are traded at several thousand euros – and apparently also bought, although they are neither limited goods nor special models. The manufacturer Swatch also emphasized this several times.
Although no official start, let alone a date for online sales, has yet been announced, the watches should be available on the manufacturer’s website in the coming weeks.

Anyone who cannot muster the patience to start online sales will find what they are looking for on the Internet, but must reckon with price increases of several thousand euros.