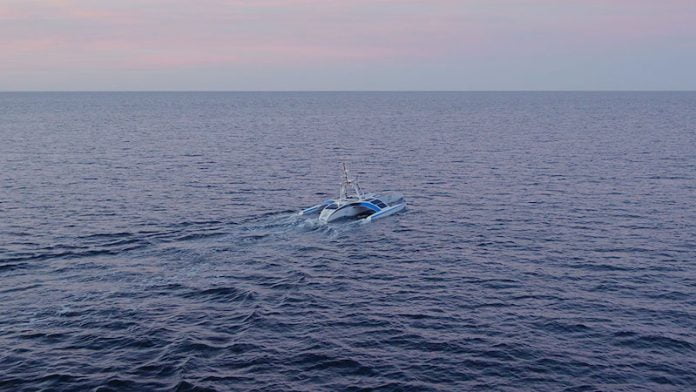 The Mayflower Autonomous Ship (MAS400) recently launched its second attempt at an Atlantic crossing. In three to four weeks, the electric trimaran will drive unmanned and independently from England to the USA.

Completely unmanned and controlled by an artificial intelligence: This is the Mayflower Autonomous Ship (MAS400). Since the end of April, the electric trimaran has been autonomously navigating international waters and trying to cross the Atlantic.

The non-profit marine research organization ProMare and the IT company IBM announced that the electric ship is en route from Plymouth in the UK to the US.

The electric Mayflower has no captain or crew on board. Completely unmanned, the ship uses IBM’s automation, AI and edge computing technologies to navigate international waters.

The ship is 15 meters long and 6.2 meters wide. At full speed it reaches a maximum speed of 10 knots (18.5 kilometers per hour). The Mayflower weighs five tons and is powered by a solar powered hybrid electric motor.

For bad weather, however, the Mayflower also has a diesel generator on board, which charges the batteries in an emergency and supplies the other systems with electricity.

There are six AI cameras on board the Mayflower, as well as 30 sensors that collect data on the weather, the water or navigation, among other things. These are continuously evaluated in real time to ensure a safe journey.

The unmanned trimaran is scheduled to cross the Atlantic Ocean in three to four weeks. On her journey, the Mayflower is to collect sea data and observe their development. This data should also give scientists the opportunity to gain an understanding of the most important global problems related to ocean health.

It is also about the acidification of the seas as well as the protection of marine life. The scientific experiments on board are managed by IBM, ProMare, MarineAI and four universities. The declared goal of crossing the Atlantic is to make a contribution to securing the future of the oceans.

In addition to the scientific background, the Mayflower’s journey has other ambitious goals. “The project aims to support the development of fully autonomous AI systems and applications for use in a variety of industries such as shipping, oil and gas, telecommunications, security and defense, fisheries and aquaculture,” the official says Explanation.

The current voyage of the electric ship is already the second attempt at a transatlantic crossing. The autonomous ship set sail for the first time in June 2021. However, the attempt at that time had to be canceled due to a mechanical problem with the hybrid drive system.

Interested parties can follow the route and conditions of the Mayflower on its journey on the official website of the MAS400. IBM and ProMare also provide a mission dashboard that contains videos, maps and data. Visitors to the website can stream them live.

The Mayflower Atonomous Ship was named during a special ceremony marking the 400th anniversary of the original Mayflower. This had left the port in Great Britain for the first time in 1620.