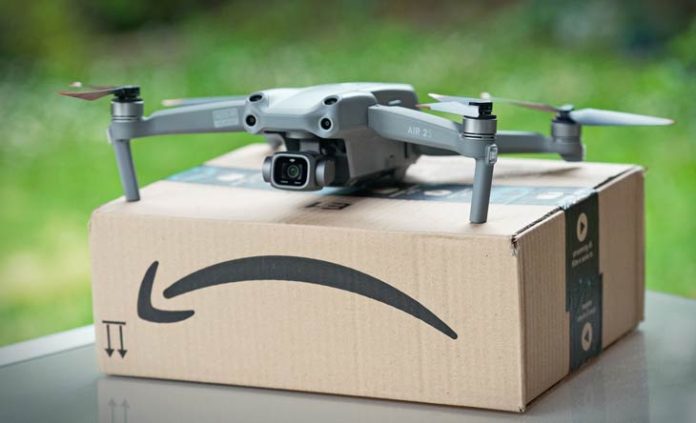 In the future, Amazon would like to send its packages by drone. The device should be able to automatically control the customers’ gardens and even avoid obstacles. The project will initially start in California.

After around ten years of development work, Amazon now wants to start the Prime Air delivery program in the near future. The company points this out in a press release.

Amazon chose Lockford, California, as the first destination for the automatic parcel delivery via multicopter.

The small town in the northeast of the state, home to around 3,000 residents, offers good conditions for a positive start for the new Amazon service.

Not designed for every package

Residents are free to register free delivery via drone in advance. Prima Air is a service that – like Prime Now – promises fast delivery of important items within an hour. Accordingly, the range is manageable.
In return, this means that classic Amazon orders will continue to be distributed in Lockford by couriers in the future.

A special feature of the drone system is that the devices detect mobile and static obstacles and avoid these objects. Another advantage is that no human observer is required to monitor the flight of the drones.

In addition, a detection and avoidance system is integrated into the drones so that the drone does not come into contact with obstacles in the target area.

This makes the drones perfectly suited to enable safe delivery of the package.

Since the program was launched, Amazon has built and tested more than 20 prototype drones. The MK27-2 is the current model with a hexagonal design and six propellers. This makes the model particularly stable and manoeuvrable.
The propellers have been designed so that the components emit as little high-frequency noise as necessary. Deliveries in Lockford are scheduled to begin later this year. Potential customers can already see during the ordering process which products will be delivered by air transport. The recipients then receive an estimated time of arrival for the order.

This is how delivery works

After the drone has flown to the respective garden, the device descends to a certain height and drops the cargo. After the start of the project, Amazon would also like to deliver corresponding videos and photos. If the pilot project works smoothly, it can be assumed that Prime Air will expand the service to other locations and customers in the near future.