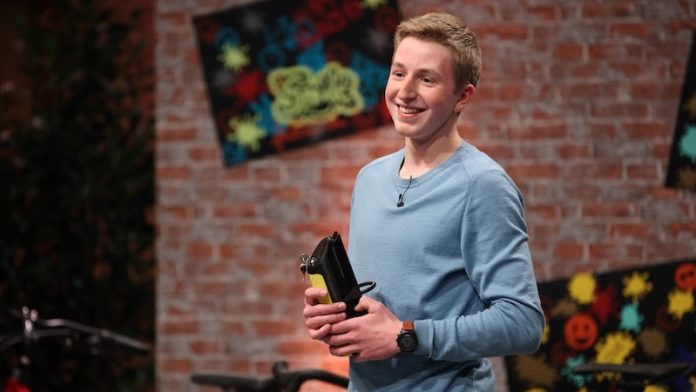 In this questionnaire, we ask the founders and participants of the Vox show The Lion’s Den questions about their products and experiences on the show. This time: Aaron Holzhäuer, founder of BeeMyBox.

Anyone who rides a bike a lot should be familiar with this problem: Without a bag, smaller items such as keys or wallets cannot be stowed away well during the ride. Accessories such as lamps and speedometers usually remain unprotected on the bike after the ride.

Founder Aaron Holzhäuer has a solution for this: the BeeMyBox. With the lockable bike box, smaller items can be safely stowed away on the bike after and during the ride. In the new season of “The Lion’s Den” he was able to convince three lions of his product.

Carsten Maschmeyer, Georg Kohler and Ralf Dümmel made a joint deal. At the time of his pitch, Aaron Holzhäuer was just 17 years old.

Note: According to the recording, the start-up of “BeeSafe“ in „BeeMyBox“ renamed.

BeeMyBox: The lockable bicycle box from “The Lion’s Den”

BASIC thinking: Hello Aaron, you are part of the twelfth season of “The Lion’s Den”. How does that feel?

It is a very good feeling when your own product receives such media attention. And it’s a great opportunity that I want to use as best as possible.

What makes BeeMyBox so special?

BeeMyBox is a lockable box for mounting on the bike. In it, for example, bicycle lamps, speedometers and other bicycle accessories, but also sunglasses and other smaller items can be stowed away theft-proof and you don’t have to carry them around with you.

The lids can be easily replaced. In addition, the BeeMyBox with power bank has an integrated solar panel that charges a battery. Inside, the box has all the charging connections you need to charge lamps or your cell phone on the go.

The biggest difference to other products on the market is that many of the bicycle bags available on the market usually cannot be locked. There are closable ones underneath, but these are only attached with Velcro straps and are made of textile that can be easily cut open.

How did you come up with the idea and your concept?

The trigger for the development of BeeMyBox was the fourth theft of my bicycle accessories. Since I’ve always enjoyed building and constructing things, I thought to myself that things couldn’t go on like this and that a good solution had to be found at last. After a development period of more than a year, the final prototype was created.

And how did you end up in The Lion’s Den?

I’ve always enjoyed watching the show privately. When I developed BeeMyBox, I thought that “The Lion’s Den” was the perfect opportunity to find an interested investor who, in addition to his experience, also has a large network and can support me with the appropriate capital.

That’s how the negotiations went

What was on your mind just before your pitch?

I tried not to think that millions of people would be watching. I just thought to myself “close your eyes and through”.

And how did the negotiations go?

There was no real negotiation because the lions made fair offers in my opinion. When Dagmar Wöhrl’s offer came very early on, I was reassured at first. She accepted my offer and suggested I work together.

Shortly afterwards came the offer from Carsten Maschmeyer, Ralf Dümmel and Georg Kofler, who asked for 40 percent for my desired 145,000 euros. Fortunately, after Nils Glagau’s offer, they went down to 30 percent. I thought that was fair and accepted – also because the offer came from several lions.

BeeMyBox: This is how it goes on now

What has happened to you and your product since shooting and participating?

A lot has happened since the shoot. Small adjustments were made to BeeMyBox. Beautiful packaging was designed and there is now a box with an integrated combination lock in addition to the key lock variant. Personally, I also learned a lot about all the processes involved in products.

And how does it continue? What are the next steps?

The next steps will be to stabilize BeeMyBox sales in the long term and to place them in more stores. We are also working on offering customers more color combinations and lids with additional functions. For example, a mobile phone holder cover is planned.

Looking back, how do you rate your experience at The Lion’s Den?

So far, the VOX start-up show “Die Höhle der Löwen” has been a very good experience for me. You have unique experiences and can take big steps forward with your startup that would otherwise never have been possible so early on. I came on the show with prototypes and soon I can see my own product on store shelves and mounted on bikes.

→ You can buy the BeeMyBox here.