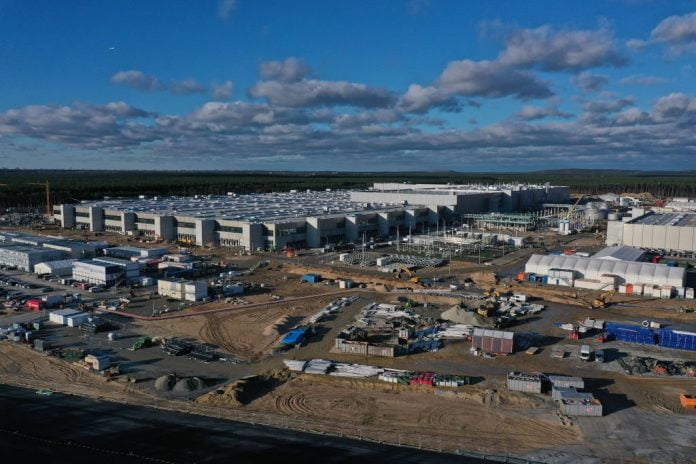 According to a media report, the plans threaten to burst. Also: deal worth millions – Adobe buys designer company Figma and Ethereum switches to energy-saving operation.

Tesla has apparently put the plans for its battery production at the Grünheide plant near Berlin on hold. This should actually create thousands of jobs. As the “Wall Street Journal” reports, the US automaker wants to change its battery strategy in order to benefit from new tax incentives in the United States worth billions. The production of batteries and electric vehicles is heavily promoted there. Elon Musk did not comment on the report.

Brandenburg’s Economics Minister Jörg Steinbach (SPD) told the “Tagesspiegel”: “We have no information that anything is to be relocated. In principle, the expansion will remain as planned”. Elon Musk’s company has been producing electric vehicles in Grünheide since March. Actually, the European plant should also become the world’s largest battery factory. Their construction is at an advanced stage. [Mehr bei Wall Street Journal, Handelsblatt und Tagespiegel]

On the founding scene: “In our house, everything has always revolved around carpets,” says Ramin Mohammadi. His family has been selling Persian carpets for several generations, but he did not want to continue the business. Instead, Mohammadi founded a carpet startup himself. With Teppana the hamburger addresses allergy sufferers, for example, because its products can be washed – and the business can be scaled better. [Mehr bei Gründerszene]

Adobe buy the web designer Figma for $20 billion. The amount is to be paid in cash and shares. A little over a year ago, Figma was valued at $10 billion, half of the purchase price. Figma specializes in collaborative software tools for creating web designs. The startup benefited from increased demand as a result of the corona pandemic and the trend towards working from home. According to his own statements, his customers include Airbnb, Google, Spotify, Netflix and Twitter. The acquisition is expected to be completed next year. The Adobe shares reacted before the market with a price slide of more than ten percent. [Mehr bei Handelsblatt, Wall Street Journal, CNBC und Financial Times]

Ethereum has completed its biggest upgrade to date. Experts speak of a turning point for the entire crypto sector. So far, all indications are that the so-called merge — which aims to reduce the cryptocurrency’s energy consumption by more than 99 percent — was a success. The overhaul of the Ethereum network is fundamentally changing the way blockchain secures its network and verifies transactions. The price of Ether jumped to around $1640 after the upgrade. [Mehr bei CNBC, Bloomberg und Guardian]

The sales and prices of NFTs (Non-Fungible Tokens) have surged following the Ethereum upgrade, according to crypto data tracker Dappradar. One of the most valuable NFT collections, Bored Ape Yacht Club, reported sales of $1.3 million, up 187 percent in 24 hours, according to Dappradar. Cryptopunks, another popular NFT collection, reported a 56 percent increase in trading volume to $1.4 million over the same period. The #1 NFT marketplace by sales Opensea [Mehr bei Bloomberg]

Rumblea video platform that is proving to be an alternative to Youtube established, is scheduled to start trading on the US technology exchange Nasdaq next week. Earlier, shareholders of the Cantor Fitzgerald Acquisition special purpose vehicle voted to approve a $2.1 billion deal to take the service public via Spac. Rumble announced on Tuesday that it increased monthly active users to 78 million in August, up from an average of 44 million in the second quarter of 2022. [Mehr bei The Information]

The $75 billion acquisition of the video game maker Activision Blizzard through Microsoft faces in-depth investigations in Brussels and the UK. This is due to growing concerns that the deal is anti-competitive and will bar competitors from accessing the blockbuster Call of Duty game. Regulators expect a lengthy investigation. [Mehr bei Financial Times und Reuters]