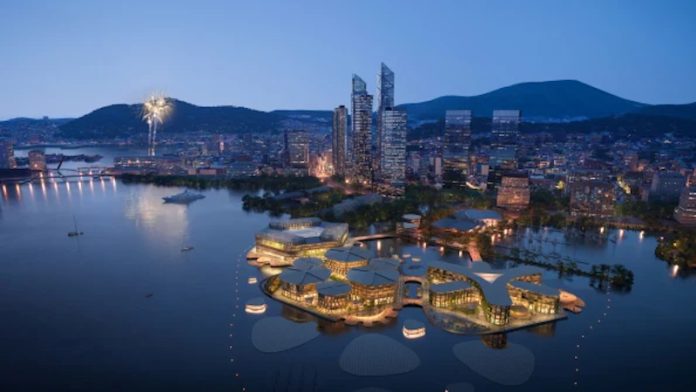 The US start-up Oceanix is ​​currently developing a new way of building cities to cope with rising sea levels. As part of the project, floating districts are to be created. South Korea could be a pioneer for further projects and coastal cities.

What is actually happening to coastal cities as a result of the consequences of climate change? Some urban planners have been asking themselves this question for years. After all, entire regions could disappear as a result of rising sea levels in the coming decades.

According to the latest surveys, 800 million people are currently living in cities whose water level will probably increase by more than 50 centimeters – and the trend is rising. A solution is needed for all these people so that they will still have a roof over their heads in 2050.

The US start-up Oceanix from New York has therefore taken on this complex problem and, according to reports, worked out an initial proposal for a solution. The affected regions should be floating on the water in the future. The city of Busan in South Korea is to serve as a pilot project in the foreseeable future.

Many cities are currently still trying to regain lost land by piling up land masses. But that doesn’t always turn out to be a good idea. For example, biodiversity is disturbed and at the same time a natural protective layer against floods away from the coasts is destroyed.

However, Oceanix’s new approach uses a different construction method: houses built on concrete platforms anchored to the seabed. The floating buildings rise and fall with every ebb and flow. Since normal concrete is not exactly sustainable, the start-up wants to use a material called Biorock.

This removes minerals from the water and thus offers algae and other plants a breeding ground to grow. New maritime habitats are also to be formed at the base.

In principle, the company wants to connect the emerging districts to the existing infrastructure. Nevertheless, the new islands should be able to be completely self-sufficient. Solar and wind power plants continuously generate electricity, which is stored in batteries and is therefore also available at low-yield times.

The floating city quarters are also intended to collect rainwater in order to then treat it for use in the household. Office space is also in the planning stage. The people living there should be able to reach them on foot.

South Korea is currently still examining whether the construction, as planned by Oceanix, can be implemented. Once the regulatory hurdles have been overcome, the work should be completed in around four to five years. An idea that could also serve as a model for other regions.