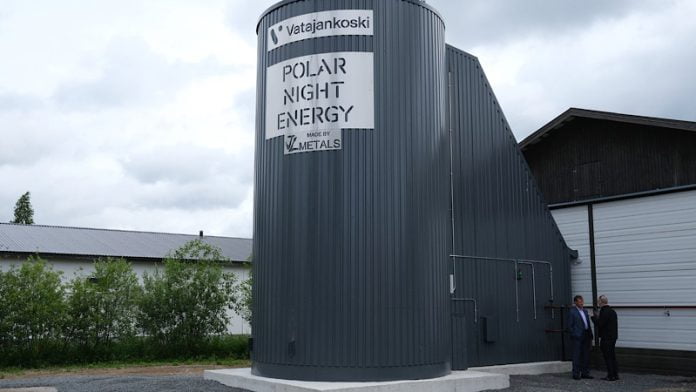 The Finnish start-up Polar Night Energy put a gigantic sand battery into operation. It can store energy for several months.

The year 2022 already had a few surprises in store – also in battery research. Because when it comes to energy storage, one revolutionary release follows the next, for example a plastic battery or a battery based on carbon dioxide.

The trend is away from classic lithium-ion storage. Alternative energy storage is coming into focus. In addition to water, which can store energy in huge pumped storage power plants, sand also seems to have great potential. At least when it comes to the Finnish start-up Polar Night Energy goes.

This is how the sand battery from Finland works

Because the company and the Finnish energy supplier Vatajakoski have developed a seven meter high tower in which 100 tons of sand are stored. This should in turn store excess energy from wind and solar power plants. The incoming energy is applied to pipes.

Similar to a toaster, these heat up and then produce thermal energy. The sand, in turn, is continuously heated and in this way reaches temperatures of 500 to 600 degrees Celsius. The heated sand remains in the gigantic silo until demand arises.

If energy is comparatively expensive, then the sand heats up a water circuit. This runs through the adjacent town, warming up the local buildings at night and on cold days. Apparently it is also conceivable that stored energy can be converted back into electricity by a turbine.

What is special about this approach is the storage period. The battery stores the eight megawatt hours of capacity over several months. So if the demand goes down in summer, the sand battery already stores heat for the coming winter. This approach takes a big step towards independence from fossil fuels.