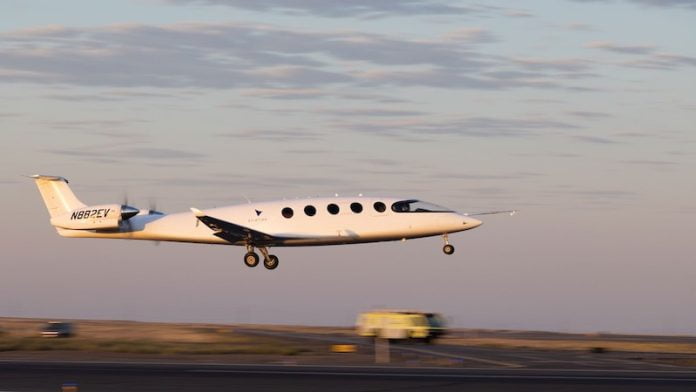 The first all-electric commuter aircraft has successfully completed its maiden flight. The electric aircraft “Alice” from the aviation company Aviation Aircraft flew a total of eight minutes in the air and reached an altitude of over 1,000 meters. The parcel service DHL has already secured several machines.

On September 27, 2022, the first all-electric commuter aircraft in the United States took off on its maiden flight. The plane took off and landed at Grant County International Airport in Moses Lake, Washington, and flew a total of eight minutes in the air.

The electric aircraft reached an altitude of over 1,000 meters. This was announced by the logistics company DHL in an official statement and secured twelve e-cargo planes for its global fleet network.

DHL wants to reduce its carbon footprint with electric aircraft

DHL hopes, among other things, to use Aviation Aircraft’s electric aircraft to achieve its goal of “net-zero emissions logistics”. John Pearson, CEO of DHL Express, said:

Alice’s range and capacity make her a unique sustainable solution for our global air transport network. It supports us in our quest to make a significant contribution to reducing our carbon footprint and ultimately achieving net-zero emissions by 2050.

According to its own statements, the manufacturer Aviation Aircraft wants nothing less than a new era in aviation. The company also spoke of a milestone and historic day. Gregory Davis, President and CEO of Eviation commented:

This groundbreaking milestone will spearhead innovation in sustainable air travel and shape both passenger and cargo travel in the future.

Aviation Aircraft sees its electric aircraft primarily as a commuter and cargo aircraft that can cover distances of up to 400 kilometers. The machine is also suitable for six to nine people and can transport up to a ton of cargo.