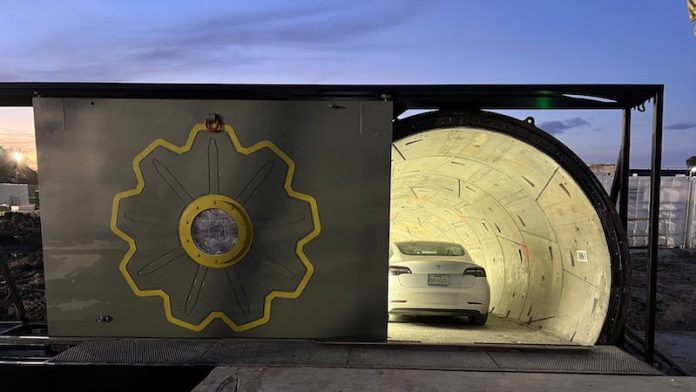 Elon Musk’s tunneling company, The Boring Company, has begun full-scale testing of the Hyperloop system. How exactly the new tunnel system works and where the test track is located is unknown.

In the midst of the chaos of the Twitter takeover, one could forget that Elon Musk is still busy with completely different projects. For example with the construction of tunnel systems.

However, there has been news recently, because The Boring Company announced per Tweet states that it has started full testing of the Hyperloop system – almost ten years after the first white paper appeared.

The announcement that The Boring Company is still working on the Hyperloop comes as a surprise. Only recently, various media reported that the development of the transport system should be stopped for the time being.

For example, the company dismantled a prototype near SpaceX headquarters in Hawthorne, California. Instead, the employees should use the test site as a parking lot.

The company’s surprising tweet now shows that the development of the Hyperloop is still up to date.

On the website, the company describes the Hyperloop as a high-speed public system in which passengers travel in autonomous electric gondolas at over 600 miles per hour. Boring Company’s tunnel supports both loop and hyperloop systems.

Beyond that, however, there are no details about the current tests. So far, the US media can only guess.

As Electrek for example, there might have been some changes to the specifications. Mainly because the photos released show a tunnel that looks different than the prototype mined at Hawthorne.

There’s definitely a loop in this rendering, but the hyperchunk might be from “hype” rather than speed.

Is the new Hyperloop just an underground highway?

What’s particularly interesting is that the new Hyperloop section seems to fit a full-size car. That was not the case at the Hawthorne test track. There are also no indications of special gondolas that transport passengers in a vacuum-like environment.

And should the new tunnel be passable by normal Teslas, it is ultimately just an underground highway.

The exact location of the new test track is also unknown. Electrek suspects based on the published photos that the Hyperloop tube shown could be in Texas.

The Boring Company also owns a property near Austin where the company has conducted some testing in the past.

The Boring Company was actually only founded as a gag

Elon Musk originally had the idea for the Hyperloop, but encouraged other companies to implement the project. As a result, some prototypes were created. However, there have not yet been any commercial applications for the system.

Elon Musk actually only founded The Boring Company to sell fan articles like hats and flamethrowers. In the meantime, however, it has actually developed into an infrastructure company that should be taken seriously.