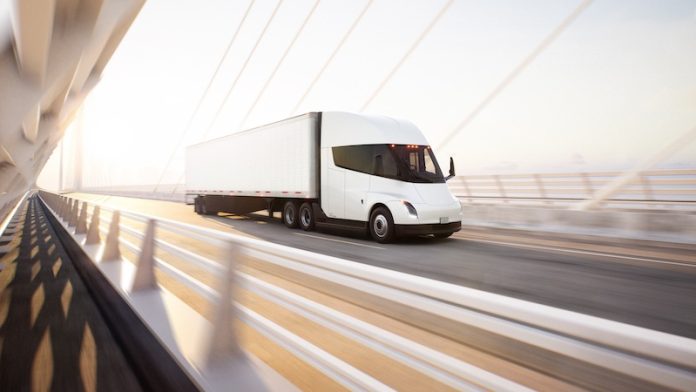 After years of delay, electric car maker Tesla has started production of its electric trailer truck, the Tesla Semi Truck. This was announced by CEO Elon Musk via Twitter. The first vehicles should roll off the assembly line in December and go to the beverage manufacturer Pepsi.

Tesla presented its semi truck to the general public in 2017. Two years later, i.e. in 2019, the electric car manufacturer wanted to produce the first models of the electric semitrailer and have them roll off the assembly line. But nothing came of it.

But it should start at the beginning of 2020. However, further delays followed. Both the corona pandemic and delivery bottlenecks thwarted the company’s plans several times. Now, around three years after the originally announced start of production, the production of the first semi trucks is actually supposed to start.

Tesla Semi Truck: The first semi-trailers will go to Pepsi in December

As early as August 2022, CEO Elon Musk announced production by the end of the year. After years of delay, the company seems to actually be able to follow its words with deeds this time. Because: Musk has now confirmed the start of production via Twitter.

Excited to announce start of production of Tesla Semi Truck with deliveries to @Pepsi on Dec 1st! pic.twitter.com/gq0l73iGRW

The first electric trucks from Tesla should roll off the assembly line on December 1, 2022 and go to beverage manufacturer Pepsi. The company had already reserved one hundred of the articulated lorries after the presentation in 2017.

This is Tesla’s electric truck

According to Elon Musk’s tweet, the Tesla Semi Truck should have a range of around 800 kilometers (500 miles). It is currently unclear how many vehicles the electric car manufacturer can produce this year. According to reports, the price will again be around 180,000 US dollars.

Another version with a shorter range of around 480 kilometers will soon follow. Beverage manufacturer Pepsi hopes that the electric trucks will reduce the fuel costs and emissions of its fleet.