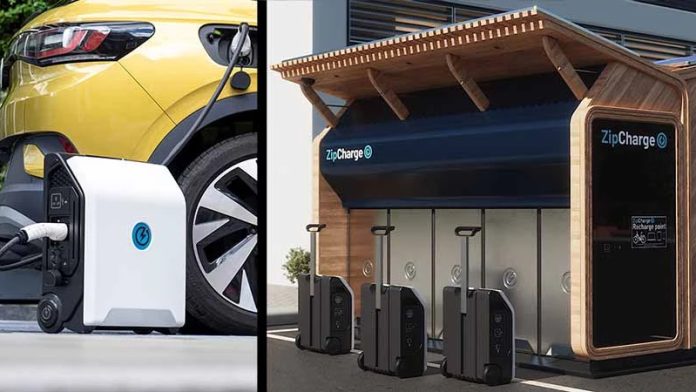 With its so-called GoHub stations, the British company ZipCharge wants to revolutionize the charging infrastructure for electric cars in the future. In the future, e-car owners should be able to collect their electricity themselves using portable charging stations.

In the coming years, one topic is likely to become increasingly relevant: storing and retrieving energy. Because in the future we will obtain most of our requirements from regenerative sources. It is therefore all the more important that sufficient electricity is available even on cloudy or windless days.

However, that is not easy at all, because technologies such as electric cars will actually increase electricity consumption. Innovative and sustainable solutions are therefore more in demand than ever.

The British company ZipCharge has developed an interesting concept for future electric car owners. Anyone who does not have an electric charging station in the driveway or lives in a rented apartment, for example, should no longer be a knock-out criterion for them in the future.

If ZipCharge has its way, e-car drivers will be able to rent mobile batteries to charge their vehicles in the future. An app should also help to find such a GoHub station so that users can pick up a tank of gas.

Because in these stations are the portable batteries ZipCharge Go already fully charged. As soon as e-car drivers have picked up a battery to charge their vehicle, they can then bring the mobile power bank back to the nearest charging station.

There is space for up to ten units. The batteries are then fully charged with green electricity via a solar system and wind turbines on the roof of the GoHub. Excess electricity in turn flows into the power grid and thus benefits other consumers.

This scenario sounds almost too good to be true. Nevertheless, the technology should be available from next year. ZipCharge even says that power banks could one day completely replace electric charging stations. Roughly in the same way that the mobile smartphone has made the landline network almost meaningless.

The company’s goals are all the more ambitious. Hundreds of millions of people are expected to have access to a ZipCharge Go battery in the coming decades. By 2030, around 100,000 GoHub stations are to be put into operation worldwide.

Then customers should have the choice of whether to buy a power bank or choose the so-called Energy-as-a-Service tariff and be able to decide flexibly on its use. A very interesting concept that could also promote electromobility.