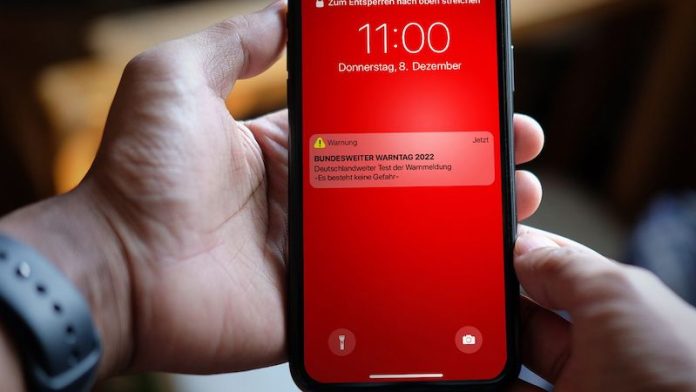 As early as February 2022, the Federal Network Agency paved the way for disaster warnings via cell broadcast. The first nationwide warning day is to take place in December.

The flood disaster in the summer of 2021 caught many people unprepared. This was also due to a lack of early warning systems.

After the ongoing criticism, the Federal Network Agency issued the technical guideline DE-Alert in February. It is the cornerstone so that mobile phone providers in Germany can use the disaster warning system cell broadcast.

Why is cell broadcast being tested?

The first nationwide warning day is to take place on December 8th. The aim is to “inform people in Germany about warning devices and processes and to sensitize them to these warnings,” according to a Vodafone report.

With cell broadcast, the population in affected areas can be warned of storms, fires, earthquakes or floods quickly and specifically via text message on mobile devices.

Before the test can take place, the providers want to inform their users via SMS in the coming days.

How does the system work?

The warnings are intended to supplement the existing warning systems in the future. The warning comes in addition to sirens, information about radio and television or the warning apps Nina and Katwarn.

Cell broadcast makes it possible to send warnings to a large number of people easily, quickly, precisely and with little data and is therefore ideal for alerting in an emergency.

In the event of a disaster, the responsible authorities inform the mobile phone providers of the affected area. These in turn then send a warning to all users in this region.

In contrast to the disaster, a warning will be sent to all mobile devices throughout Germany on December 8th. This affects 294 districts and 107 urban districts.

However, the users will not receive any SMS. Because the mobile phone providers can send a message to all devices registered in the radio area.

Depending on the warning level, this also emits a warning tone when the smartphone is set to silent. In addition, a text message appears on the screen.

Cell broadcast works even when the network is heavily loaded and without a data connection.

However, there are limitations. Because the system only works when the devices are switched on and ready to receive. They must also be compatible with cell broadcast.

This requires the latest available version on iPhones for all devices from iPhone 6s and for Android smartphones from version 11 and up.