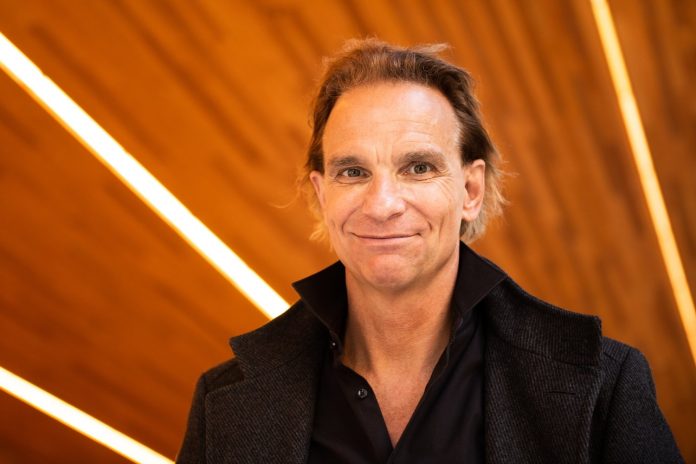 The big future should belong to the Metaverse, billions are currently being stuffed into development. Even before the hype, Dirk Lueth started Upland – and is already making money with it.

Dirk Lueth still has to make a quick phone call. Tall, lanky, longer blond hair, sunglasses as a hair band – the German somehow catches the eye here in front of The Grove restaurant right next to the Moscone Center in San Francisco, where Steve Jobs once held his famous keynotes. The backpack hangs diagonally over one shoulder and bears the brightly colored company logo – Upland.me says on it. Lueth fulfills all other Valley founder characteristics: Tesla, iPhone, Airpods and a latent inner restlessness. Maybe that’s the wrong word, but the Californian by choice seems driven.

In Silicon Valley you probably have to call Dirk Lueth an old hand. Already in 2009 he founded in Palo Alto, it was his third company after he had participated in the establishment of the Financial Times Germany in Hamburg and started a software company in Frankfurt am Main. In the American heart of the tech world, then again a software company: a platform for company data. It had to be California back then, says Lueth, because it was much easier and more money to get there than in sleepy Germany. And he was curious about the Valley Spirit, the magical attraction that companies like Apple, Google or Facebook emanate from.

He built up the company for two and a half years before selling it to a German supplier. In number four, Lueth combined media and software: sports and entertainment providers should be able to earn money with their fans. The business is attracting the attention of neighboring blockchain company API Market and Lueth is selling, in part because he didn’t feel like he was at the end of his founding journey. However, he recognized that cryprotechnology was “his thing”. After all, he had already completed his doctorate on the subject of currencies.

So now it’s about something else, but somehow also about the same thing: Lueth has built what Valley icon and Facebook founder Mark Zuckerberg proclaimed as the solution to saving his giant corporation: a metaverse. Upland.me, he already gave the name to his backpack, Lueth has been working on it for some time now, around four years, “long before the topic was hyped”, as he says in an interview with Gründerszene. And with success, Upland has a little more than three million registered users. His company, which employs 125 people, was valued at more than $300 million in the first round of financing a few months ago. 18 million dollars came from Hong Kong-based VC firm Animoca, among others.

“We were inspired by Monopoly, the idea came up at game night,” says Lueth. It’s similar in Upland: “Buying, selling, swapping virtual properties is the core. But you can also take part in treasure hunts or virtual car races or run metaventures.” What Lueth means by this: shops that list certain goods. In order to provide this, Lueth has entered into a cooperation with Fifa, among other things, and digital merchandise will be offered in the form of NFTs as part of the ongoing World Cup in Qatar. “Soon we will also introduce our NFT portal for importing and exporting your own tokens”.

What Upland aims to do differently than many existing Metaverse approaches: Not just crypto and blockchain experts, but everyone should be able to buy a piece of land in the Metaverse and use it to build a startup career. Despite everything, Lueth and his co-founder Idan Zuckerman – the third in the league, Mani Honigstein, sits on the startup’s board – want to stay close to real life. Traveling from one city to another not only costs money but also time – albeit a little less than in real life. “We want the same challenges to exist that we have to worry about in reality,” says Lueth.

There is already a business model

Upland earns money like this: The Metaverse operator takes a share of five percent for every transaction between players. Their volume varies enormously. The largest transaction so far: “The address where Rockefeller Center is in real life in Manhattan was sold for 40 million UPX.” That corresponds to around 40,000 US dollars. However, the many small transactions are at least as important, in 2021 Upland made more than 20 million dollars in sales, but Lueth does not want to give current figures.

Is Lueth also aiming for the advertising business, which large corporations like Meta are certainly aiming for? “We don’t have it yet and are basically very cautious, but I also see classic advertising in Upland in the future, such as posters along the car racetracks. However, this will be largely managed and monetized by the players.”

Analysts estimate that the market volume for the parallel worlds could reach up to 1.5 trillion dollars by 2030 – especially in the areas of entertainment and games.

Lueth’s goal is to create an open market economy governed by the forces of supply and demand, says Lueth. The blockchain is intended to ensure that the Uplanders have a claim to “real property”. And that should not only exist in the Upland.

For one, Lueth has given its Metaverse currency UPX a fixed exchange rate to the US dollar, 1,000 UPX earned equals one dollar. The player with the highest ‘net worth’ in Upland currently has around three billion UPX – which corresponds to a considerable three million dollars, at least in theory. “He – like other Uplanders – can sell his digital goods to other players for US dollars. The users here are the entrepreneurs running this business with the aim of generating income.”

On the other hand, Lueth also advocates that the virtual persons – avatars – can be moved from one metaverse to another. The Upland founder is also involved in the Open Metaverse Alliance for Web3, of which he has just been elected chairman. Its members are committed to open interoperability between the platforms. However, large providers such as Meta or the Microsoft subsidiary Activision have not yet joined the initiative.

In the California sun, Lueth has to move on. Fix paying for the meal with the platinum Amex in the cell phone case, the sunglasses on your face, the shop calls. He still has one of his books in the trunk of his Tesla, which he definitely wants to give away. It’s called “Navigating the Metaverse”, a guide to the endless possibilities in a Web 3.0 world. Signed with a dedication, Lueth looks at his watch, he has to make a call again soon.