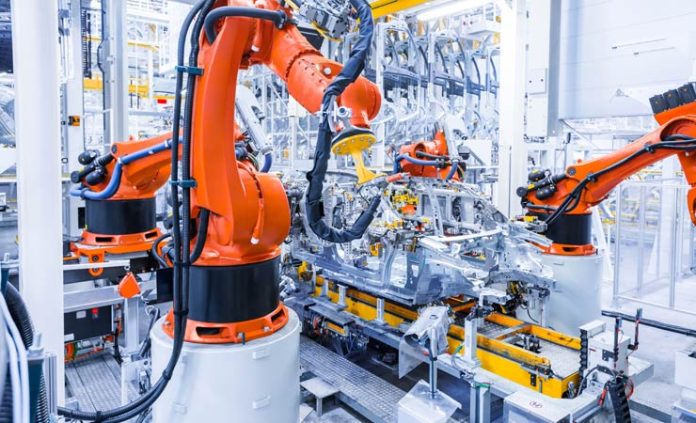 Many people who do not work in industry may not be aware of it, but robots have become an integral part of production today. For a surprising number of years, they have been taking on menial jobs and supporting the mass production of manufacturing plants. Without them, the demand for products in the rich western countries and the export of many goods would not be possible. Because they make it possible to replace human work, especially in simple activities, and thus reduce the costs incurred in production.

Industrial robots can be roughly divided into three types of robots, which take on different tasks in manufacturing companies and are therefore used differently. Below is an overview of the three areas of application and the use of industrial robots in small to medium-sized and large companies.

Many industrial robots fall into the material handling category. This means that the robots are designed for material transfer as well as for loading and unloading machines or production parts. Accordingly, they take on tasks such as moving material or workpieces from one place to another.

For example, these robots take parts from one conveyor belt and place them on another.

The tasks that this category undertakes are accordingly relatively simple and support human labors rather than replacing them.

This category of robots already takes on somewhat more complex tasks. A robot specialized in processing operations processes a workpiece in which it functions, roughly speaking, as an automated tool.
For example, these robots can perform welding, grinding, polishing or painting work. However, robots in this category can also take over milling, in which a lathe spindle serves as a tool for the robot.

Industrial robots that perform processing operations are most commonly used in the manufacture of cars. For example, they carry out spot welding on the car bodies. The robot positions a spot welder, thus completing the assembly of the body. Insofar as the robot can still be seen here as a support for human work, robots in this category are already beginning to replace human workers.

This last category requires significantly more sophisticated robots compared to the other two. Since manual work in both assembly and inspection is associated with high costs, it is expected that the use of industrial robots in this category will increase significantly in the coming years and that human jobs will be cut accordingly. Along with technological advances, robots are also developing and can gradually take on these more complex tasks.

In automated assembly by robots, they either use an assembly tool or move components to the right places.

Since assembly describes a sequence of individual operations on the workpiece and is therefore very individual and versatile, the versions of robots that specialize in this area are just as complex. The robot, which specializes in inspection, positions a sensor on the workpiece to check quality claims.

In summary, it can be said that the use of industrial robots in the three categories is of great advantage for modern manufacturing companies. Although certain tasks previously performed by humans are now being taken over by robots, they still act more as a support than a substitute. Through the use of robots, many jobs can be automated and carried out quickly, which would otherwise have a time-consuming effect on the production process if carried out by human hands. In some cases, it is now sufficient for people to monitor the work done by the robots, so that there is a significant overall increase in efficiency.
Of course, there are also corresponding investment costs for robots, so that they are particularly suitable in larger productions or in places where they are used frequently and regularly.