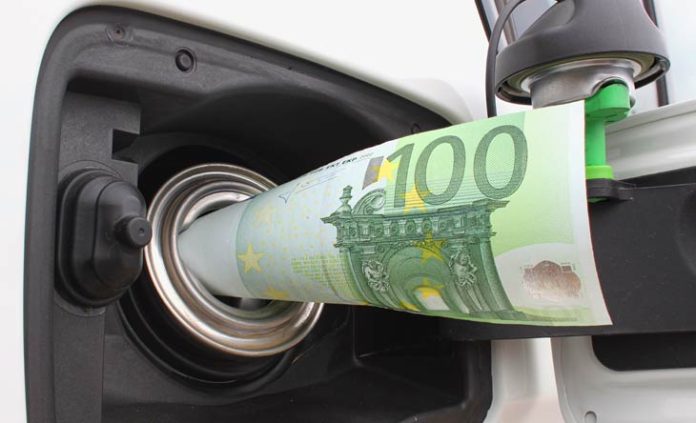 Just leave the car parked whenever possible. Of course, this tip offers the most potential in terms of fuel consumption. However, millions of Germans depend on the advantages of cars.
Anyone who cannot use bicycles, public transport or carpooling as alternatives should therefore drive as fuel-efficiently as possible.

Do without unnecessary transport goods

An additional weight of 100 kilograms leads to an additional consumption of 0.3 liters per 100 kilometers.

In the city, consumption is particularly high when drivers frequently have to start or accelerate.
If accessories such as beverage crates or sports equipment are not absolutely necessary, the utensils do not necessarily belong in the car. Because roof boxes, carriers for bicycles or roof racks have a high level of air resistance, the fuel consumption of the vehicle also increases as a result.

Drivers should also consider that the bicycle is a sensible alternative, especially for short distances. Another solution would be to combine several isolated journeys into a longer tour. During a cold start in particular, the engine is dependent on higher amounts of fuel. Gasoline engines in particular depend on a good mixture with more fuel in the warm-up phase.

After the start, rapid acceleration makes sense. But it is just as important to shift up in good time. The ADAC recommends a gear change of 2,000 rpm.
It is important to maintain the driving speed at low speeds while driving. After that, drivers should only downshift if the engine jerks. Some modern vehicles are also equipped with Eco shift recommendations in the speedometer display.

Anticipatory driving also leads to benefiting from the braking effect of the engine for as long as possible. In many vehicles, the fuel supply is automatically deactivated during overrun.

In this situation, it is important not to shift out of gear when drivers are approaching a red light or slowly entering a town.

If you prefer driving at a constant pace and without high speeds, you can also reduce consumption. In addition, air resistance affects fuel consumption from a speed of 80 km/h. With an integrated cruise control, the device contributes to a smooth ride on longer journeys.

Shut off the engine if possible

In general, as soon as the car is not driving, it is important to switch off the engine. This recommendation applies to all interruptions that exceed at least 20 seconds. When idling, a vehicle needs about half a liter to a liter per hour.
Some modern vehicles also have an automatic start-stop system. If this is not available, drivers have to turn the key themselves. When the engine is warm, however, the load on the battery and starter is minimal.

Only switch on the most necessary electronic devices in the car

A vehicle also offers savings potential if drivers only turn on the most necessary electronic devices in their vehicle. For example, it is important that convenient features such as seat heating are only in operation for as long as is actually necessary. In return, drivers are well advised to use safety features such as windscreen wipers, lights or windscreen heating as little as possible.

A well-functioning air conditioning system is an extra, the advantages of which most drivers would not want to do without.

However, depending on the vehicle and the technology, an air conditioner needs 0.3 to 1.5 liters per 100 kilometers. That’s why bargain hunters shouldn’t cool down their car too much.

At higher speeds, fuel consumption increases due to turbulent air flows when drivers open the side windows or sunroofs. If the windows are even open on both sides, consumption increases by 0.2 liters per 100 kilometers. At low driving speeds, the method promises a consumption advantage over air conditioning.
In addition, too little air in the tires not only leads to increased fuel consumption. At the same time, drivers have to put up with longer braking distances and poorer driving behavior under these circumstances. Consumption increases by five percent when the tire pressure is 0.5 bar too little. That is why specialists advise checking the tire pressure at least once a month.

Refuel at the right time

Fuel is particularly expensive during rush hour. Fuel is cheapest between 6 p.m. and 7 p.m. and between 8 p.m. and 10 p.m. Price differences between individual providers are sometimes immense. Tank apps that enable price comparisons in real time are a good help.

If you want to save money at the gas station and therefore want to drive abroad to fill up, you should carefully consider how sensible these detours are. Those who live near the border may make a good decision by taking the detour. But those who cover longer distances – exclusively for refueling abroad – may choose a negative deal.