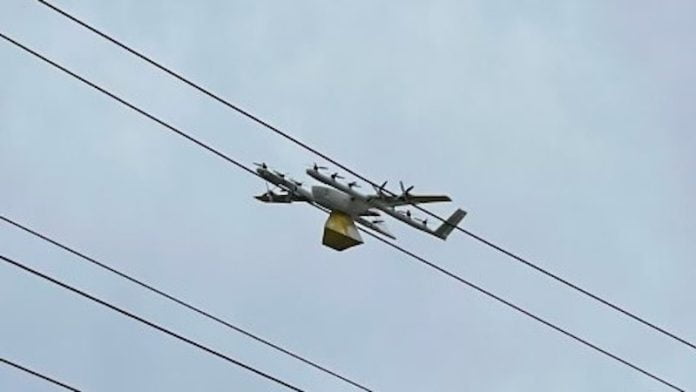 A delivery service drone from Alphabet subsidiary Wing landed on a power line in Brisbane, Australia and caught fire. This caused a power outage in hundreds of homes. Over 2,000 people were affected.

Our everyday life is in constant change. The way we live today is vastly different than ten years ago. One reason is that companies continuously adapt their processes to new circumstances. Wing, a subsidiary of Google parent company Alphabet, is researching the delivery of packages by drone.

But that doesn’t always go well, as a case from Brisbane in Australia shows. Because there a drone got a little too close to a power line of the local energy supplier Energex. What followed was what Wing calls a “precautionary, controlled landing.” However, this caused a massive power outage.

When the drone touched down on the power pole, it caught fire and fell to the ground. Alerted by the process, Energex shut down the entire power grid in the affected area as a precaution. Almost 2,000 people then had no electricity for 45 minutes. 300 customers even had to wait three hours for the lights to come on again.

According to initial investigations, around 11,000 volts flowed through the power lines. So it’s no wonder the drone burst into flames and fell to the ground. Wing offers various delivery services in the area. Drones with fixed wings are used for this, but also models that hover in the air with propellers.

Hardly any critical accidents in everyday life so far

A total of around 100,000 customers in Brisbane and the surrounding area are supplied with deliveries. Despite the accident, the aircraft have so far delivered around 200,000 packages. A critical accident on 200,000 flights shows how comparatively safe the method is.

In addition to Australia, Wing is also active in Finland and the United States. The first pilot projects would like to test how lucrative the business with autonomous delivery is. So far, the technology has not been convincing in comparison to conventional delivery. Logistics giants like Amazon continue to rely on road transport.