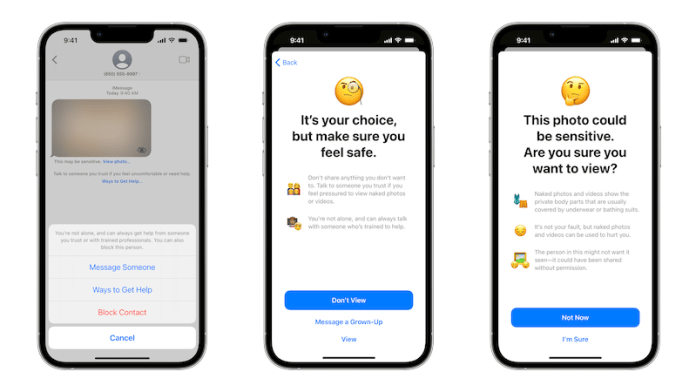 Apple is now also introducing the nude photo scanner for iMessage in Germany. The function is intended to bring more child and youth protection to the iPhone and iPad.

The nude photo scanner for iMessage is already active in some countries, and it is now set to launch in Germany as well. Apple also integrates its nude filters into the family sharing settings in this country.

The US group wants to ensure more child and youth protection on its end devices. In addition, sexual abuse and cybergrooming should be nipped in the bud.

How does nude photo scanner for iMessage work?

The nude photo scanner consists of two major building blocks, as Apple listed when it was released in the US in late 2021. First, parents can adjust the security settings for their children’s devices. You can turn on alerts when your kids send or receive nudity photos.

Part two of the setting are warnings for the children themselves. If they send or receive images that contain nudity, the image appears blurred – followed by safety instructions and assistance. Children can then block the appropriate contact, reach out to an adult, or choose to view the photo or not.

Where is the nude filter available so far?

The nude photo scanner for iMessage has been available in the USA since mid-December 2021. Here the iPhone group introduced the new feature with the update to iOS 15.2. Other markets followed in the spring. After the USA, the start followed in Great Britain, Canada, New Zealand and Australia.

Now the new feature will be introduced in Germany and also in France. However, use is initially reserved for users with a developer account. Because the beta version for iOS 16, iPadOS 16 and macOS Ventura released by Apple is not yet the public beta version. This is to be published later.