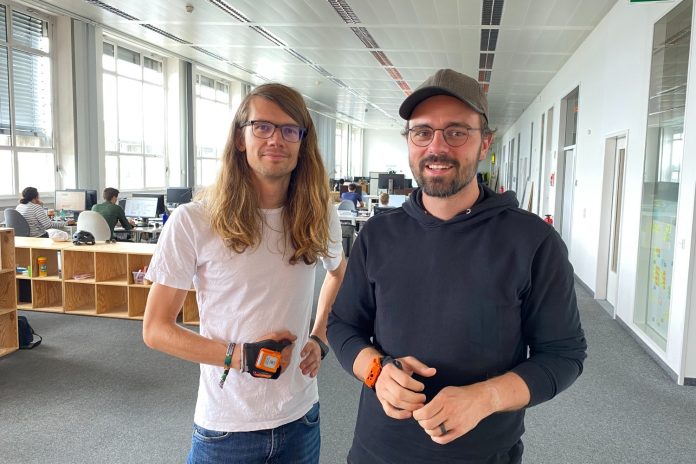 For a company that has allegedly made its founders multi-millionaires, Proglove is surprisingly calm. “We tend to build everything ourselves,” Thomas Kirchner and Paul Günther keep saying while showing their office. The two founded the Munich startup Proglove, which builds smart gloves for industry. And they are made in the Munich office between the meeting room and the reception desk. In a large room not far from the tea kitchen, employees are standing at a conveyor belt about three meters long and are assembling the gloves. The startup even designed the production lines itself. In the next room, Kirchner and Günther show the iron with which the first gloves were pressed. A relic from the founding history. Likewise the water barrel and the pizza oven, in which the products were initially tested.

The strategy, “We tend to build everything ourselves”, runs like a red thread through the company’s history. The idea for Proglove came about over a weekend at the end of 2014. The founding team had heard about an ideas competition run by the chip manufacturer Intel, which promised prize money of one million euros. Deadline was in three days. A project under time pressure. “Our first prototype was basically a glove from the hardware store with an iPod on it and a few cables,” says Paul Günther. “And then we just ran some animations on it for this film that we had to submit.”

From multi-tool to barcode scanner

Günther has a degree in mechanical engineering and worked for many years as a tour guide in the BMW plants alongside his studies. Kirchner dropped out of management studies to focus on his numerous tech projects. One was an online shop for green electronics, which he and Günther set up during their studies. He also worked on projects with the other two Proglove co-founders Alexander Grots and Jonas Girardet. At that time, the friends had decided to focus on one project and establish it instead of constantly starting something new, says Kirchner. However, the last project would not have suited the task of the competition. So Proglove was born.