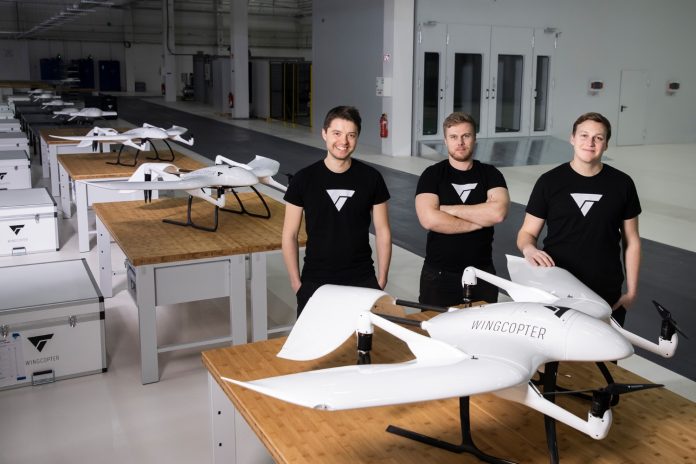 Wingcopter wants to provide medical care to parts of Africa. The drone has technical advantages over a competitor – and yet the major order is on the brink.

The Kawumba Healthcare Center in central Malawi is a low-rise building in an inhospitable area. It is many kilometers to the next hospital over bumpy roads that are sometimes difficult to pass in the rainy season. But lately, sometimes help comes from above.

Like a celestial phenomenon, a whirring drone then hovers in and brings medicine and vaccine or collects blood samples for testing. A total of ten such delivery drones from the German manufacturer Wingcopter are in use in the Southeast African country to soon supply a region with 7.5 million people with medical supplies.

The Wingcopter 198 is hardly larger than a model airplane. It can navigate autonomously using GPS navigation, has four or eight small propellers, depending on the model, and has a small cable winch in its belly, which can be used to rappel down a loading box 30 meters below the surface. It’s probably every ten year old’s dream.

But the aircraft is not a toy, but a delivery drone costing around 100,000 euros for professional use. 240 kilometers per hour top speed, 120 kilometers range, 100 meters cruising altitude, maximum six kilograms payload. That’s not much if you think in terms of a parcel service. But enough when it comes to vital things like emergency medication.

In the coming years, thousands of such drones are expected to play a crucial role in providing medical care to large parts of Africa. The start-up Wingcopter from the southern Hessian town of Weiterstadt recently reported a corresponding major order. 12,000 aircraft are to be delivered to Continental Drones over the next five years, which intends to use them to establish a delivery network in 49 sub-Saharan African countries.

At the beginning of the Wingcopter story there was a kind of awakening almost ten years ago in Ghana. Today’s Wingcopter CEO Tom Plümmer completed a voluntary year in the West African country after studying digital media. He made films with a drone for a non-governmental organization and was amazed by the friendliness of the people.

Then, in the house next door to his host family, a baby died after birth. “Quick medical help might have saved the child,” says the 32-year-old, who soon contracted malaria himself but had the medication to recover. The experiences made things difficult for Plummer. Why only shoot films about Africa with the drone, he asked himself. “Actually, it would be great to use the drone to transport things to the people who urgently need them.”

Back in Germany, he met Jonathan Hesselbarth, the son of a flight instructor and engineer, who had been working on a drone with a tilt rotor drive for some time. After vertical takeoff, the rotors are rotated 90 degrees, turning the drone into a small prop plane, allowing for great speeds and range. Industrial engineer Ansgar Kadura was added later. Together, the three founded the company Wingcopter five years ago. Production of the first production model, the Wingcopter 198, began earlier this year.

Plümmer is now standing in the gallery of a production hall measuring almost 10,000 square meters that the company took over from e-bike manufacturer Riese-Müller. There is a kind of beach bar with pool billiards, a few employees are at the foosball table. The production itself seems a bit improvised for a drone factory. A single industrial robot stands around, still without a recognizable function.

One thing above all is missing for industrial production: money

The plastic chassis of the drones are laminated by hand and baked in the oven. A time-consuming process, and mass production is a long way off in Weiterstadt. It’s hard to imagine how 12,000 drones will soon be pushed out of the hall. “That’s a pretty big number,” agrees Plümmer, sounding confident. The aim is to achieve an output of twelve drones a day in three-shift operation, says Plummer. “We’re really ramping up.”

In order to set up industrial production for thousands of drones, Plümmer and his colleagues now need one thing above all: money. They have collected around 25 million euros so far. That’s enough for tinkering in the project phase, but it’s practically nothing to compete with other drone manufacturers as a global provider. Its closest competitor, San Francisco-based Zipline, raised $250 million last year and is valued at $2.75 billion.

The American delivery drone seems inferior in technical terms. The zipline drone cannot take off or land on its own, but must be launched into the air with a catapult device. The US drone drops its cargo by parachute and has to catch it with a safety net. The Americans can already show 275,000 commercial deliveries, in the area around the Rwandan capital Kigali, it is said that 75 percent of all blood samples are sent by zipline.

“Transport by drone helps to significantly reduce waiting times for patients and save lives – especially in remote regions,” says a spokeswoman for the Gesellschaft für Internationale Zusammenarbeit (GIZ), which has been cooperating with Wingcopter on behalf of the federal government since 2018. More than a ton of medicines, for example against malaria and HIV, have already been flown to health centers from the drone hub in Malawi.

There are many possible uses for delivery drones, says Plümmer. In addition to projects in several countries in Africa and South America, Wingcopter is already being tested successfully in Japan and the USA. In Mecklenburg-Western Pomerania, the drones transported blood samples from Wolgast to the Greifswald University Hospital. A lack of roads is usually not the problem in the industrialized nations, says Plummer. “But these are often clogged. Our drones fly above the traffic jam.”

This article first appeared on Welt.de.