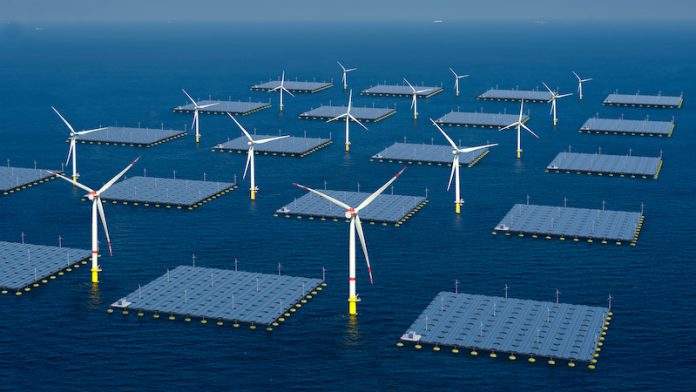 The German start-up Sinn Power has developed a platform that is a wave power plant, solar system and wind turbine all in one. The floating hybrid module taps into three sustainable energy sources at the same time.

In the race against climate change, researchers and companies around the world are constantly developing new ideas for sustainable energy – including in Germany, of course. The German start-up Sinn Power even taps into three renewable energy sources at the same time. To this end, the company has developed a new technology for offshore power plants.

In Heraklion, Greece, the new offshore power plant is already part of an off-grid energy solution. A combination of wave power plant, photovoltaic system and wind turbine is intended to supply coastal locations with electricity.

The Bavarian manufacturer has been developing innovative wave energy systems for five years. During this time, the new wave power plant adopted a robust structure that can withstand particularly harsh maritime environments. For example, the individual modules can withstand waves of up to six meters in height.

Each unit consists of four integrated wave energy converters that generate energy depending on the water conditions. In regions with low waves, additional photovoltaic cells generate electricity. In addition, four small wind turbines can be connected to each square-shaped module.

All three energy sources also work at the same time. They form a huge energy park. According to Sinn Power CEO Philipp Sinn, the fact that the floating platforms consist of individual modules is a key aspect of the technology.

A floating platform with variable modules

Mainly because the size of the offshore facility is variable as a result. In addition, the floating modules adapt to the climatic conditions of the respective location.

The floating platform can, for example, supply island resorts in the Caribbean with renewable energy and contribute to the worldwide implementation of offshore wind farms.

Furthermore, Sinn Power does not only offer its offshore power plants for the ocean. The start-up has also developed suitable systems for lakes and lagoons.