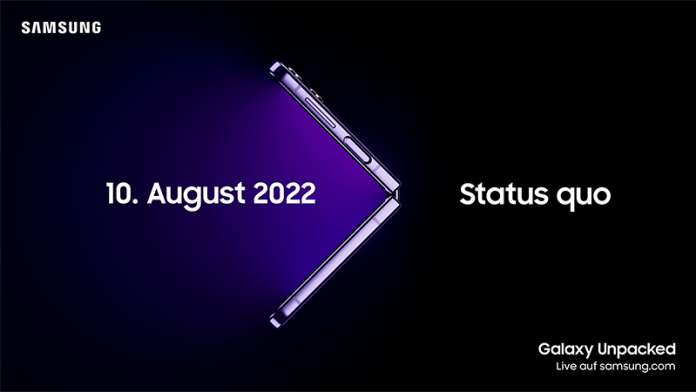 Samsung has announced the next Samsung Unpacked event for August 10, 2022. Here you can find out what could be presented there.

Korean tech giant Samsung has announced a new launch event for August 2022. A corresponding press release and social media posts were published on the night of Wednesday, July 20, 2022.

The new generation of foldable smartphones is expected to be presented under the title “Unfold Your World”. This can be concluded from the teaser image of the event. There you can see an unfolded Galaxy Z Flip – most likely the Galaxy Z Flip4.

In addition, it is also expected that the manufacturer will present a successor to the Galaxy Z Fold3. (You can find a detailed test report here.)

Samsung Unpacked: This is supposed to be a wearable

In addition to smartphones, there is also a new generation of smartwatches in the pipeline. Last year, the Galaxy Watch4 and Galaxy Watch4 Classic were presented at the August Unpacked. Rumor has it that the Classic model will be dropped this year.

At least the well-known Samsung blog “Sammobile” claims that a larger “Pro model” is planned for this year, which will come with a larger battery and larger display. This would eliminate the Galaxy Watch’s iconic “rotating bezel”.

So that you are up to date, we will accompany the “Samsung Unpacked” on August 10, 2022 with a live ticker and provide a detailed report on the new products.