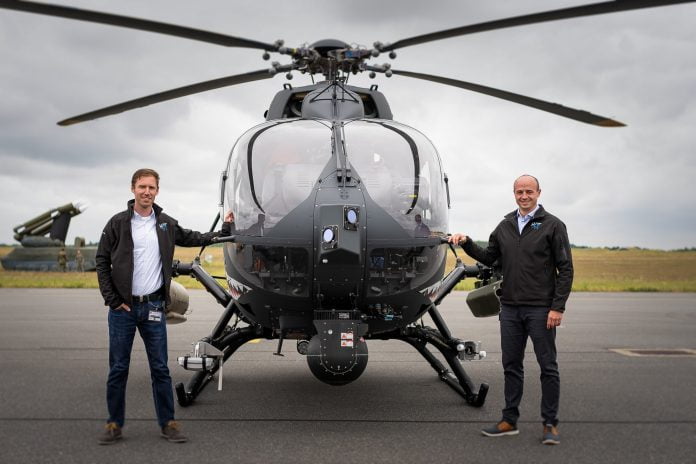 AI-controlled swarms of drones designed to detect enemies at great distances. The software from Hattec should be able to do what sounds like science fiction. Airbus is already on board.

In war zones like Ukraine, helicopters and jets are repeatedly shot down with rockets. The Munich start-up Hattec is therefore developing a solution that pilots can use to coordinate and control autonomously flying drones from the cockpit – in order to scan unknown areas in advance for precisely these dangers.

“Our goal is to make air missions safer,” explains Fabian Schmitt, one of the two Hattec founders, in an interview with Gründerszene. He is currently visiting Finland, where he is presenting his software for aircraft in front of representatives of European armies and armaments companies.

Europe is developing a new air combat system as part of a German-French-Spanish program. The program runs under the name Fcas, short for Future Combat Air System. The aim of this cooperation between the three countries is to rethink the interaction between man and machine, manned and unmanned systems. According to those involved, this is Europe’s largest and most ambitious armaments project of all time. And with a budget of 100 billion euros, according to the Frankfurter Allgemeine Zeitung (FAZ), it is the most expensive.

The startup Hattec, founded in 2018, does not want to miss this. With its software, the Munich-based company has built an interface that is intended to enable interaction between man and machine. “The system has the operational advantage that I can penetrate areas without exposing myself and my aircraft to any particular danger,” explains Schmitt.

Stations throughout Europe are required for implementation

For example, if a fighter pilot maneuvers his jet or helicopter into an unfamiliar area, the program should be able to send drones ahead. The drones, according to Schmitt’s idea, take off from ground stations that are to be distributed all over Europe.

From the air, helicopter and jet pilots will be able to take over control of the ground stations hundreds of kilometers away and use the drones “at will,” explains Schmitt.

So far, drone maneuvers have usually been controlled from the ground, not by the pilot himself. Each time, another agency, such as an operations center, has to be intervened. That only makes everything more complicated, says Schmitt. According to the founder, however, the startup’s software allows information to reach the person in the cockpit more quickly.

The software from Hattec should be able to process sensor data and video material independently during the maneuvers – and interpret them using artificial intelligence (AI). For example, whether rockets are hidden somewhere or who owns a car parked on a runway. So that the people in the helicopters are not overwhelmed by the large amount of information collected, the program’s AI should automatically make its own selection.

Also for police or mountain rescue

According to Schmitt, the software from the Munich start-up can also be used in civilian areas of activity. The help of autonomously flying drones should also make the work of mountain rescuers or police officers easier. The idea is that the aircraft can get into places that are difficult to reach from the ground or from a helicopter – which is an advantage when searching for missing persons or salvaging.

Schmitt, who is now 36, had the idea for such a system with his co-founder Yannick Brand. “We want Europe to be able to protect itself even better against military attacks in the future,” says the founder, who says he has always been fascinated by military aviation.

Both founders were previously in the Bundeswehr: Brand as a pilot, Schmitt for a year after graduating from high school as a voluntary military service with the paratroopers. He studied aerospace engineering at the University of Braunschweig, where he shared a flat with Jonas Radke, who is now the founder of Okapi-Orbits. Schmitt then moved to the Bundeswehr University for his doctoral studies, where he met his co-founder Brand.

Since it was founded in 2018, the European aircraft manufacturer Airbus has been supporting the startup, which was spun off from the University of the German Armed Forces, primarily financially. Schmitt wants to keep to himself exactly how much money flows. “We are developing a technology for defense, which is very complex,” said the founder in relation to the interest of the Dax group.

However, Airbus does not hold any shares. So far, Hattec has managed without VC money and finances itself through orders. In addition to building the drone software, which the founding duo intends to sell to the Bundeswehr and other armies in the long term, Hattec maintains other technology projects and advises companies in the field of innovative vehicle technologies.

Long implementation times, especially in the armaments industry, are not uncommon. Especially since the startup is dependent on cooperation with armies and aircraft manufacturers who want to convert the software accordingly with their own calculation boxes. “Such technologies do not develop overnight,” explains the founder.

Delays in using the software are likely

The computing boxes, which are installed both in the jet and in the drones and have to be connected to the rest of the sensors, take place where the information is exchanged. According to Schmitt, the software is compatible with almost every vehicle – including cars, for example.

The founding duo deliberately does not rely on a cloud solution. “In a military context, you cannot always assume that you have a stable connection. Pilots need to be able to operate independently, and that’s not possible if the responsible data center is on the ground.”

It is still uncertain how long it will be before the startup’s software is actually used across the board by armies such as the Bundeswehr. Or the role that Hattec will play in the European armaments project. Because the program is delayed: According to a report by the FAZ, it was originally planned to have the entire Fcas combat aircraft system operational by 2040. But disputes between the main developers Airbus and Dassault are now dragging the project out indefinitely – possibly also for Hattec.