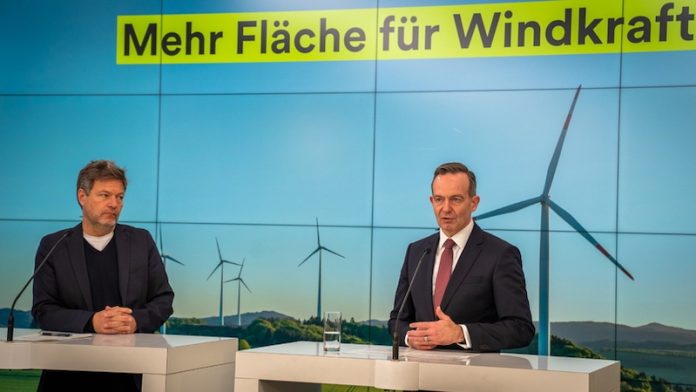 The federal government wants to promote the expansion of wind energy in Germany. To this end, the ministries have decided on measures to create space for around 1,000 new wind turbines. This emerges from the current balance sheet report on radio navigation.

The federal cabinet recently passed a balance sheet report on the subject of radio navigation. As early as April 5, 2022, the Federal Ministry for Digital Affairs and Transport and the Federal Ministry for Economic Affairs and Climate Protection had agreed on a comprehensive package of measures in the area of ​​rotating beacons and weather radars.

The goal: to make more area available for onshore wind energy in the short term. In a press release, both ministries now jointly announce that they have been able to successfully implement the measures agreed in April.

Above all, the measures make it possible to provide space for around 1,000 new wind turbines. Robert Habeck, Federal Minister for Economics and Climate Protection is enthusiastic:

Above all, with the halving of the distances for the system protection of rotary radio beacons from the previous 15 kilometers to now seven kilometers, areas are freed up for wind energy. In this way, an additional four to five gigawatts of installed capacity in the area of ​​onshore wind energy can be approved and built.

For comparison: Five gigawatts roughly corresponds to the amount of electricity that roughly covers the annual consumption of the city of Berlin. “This is an important push for the expansion of wind energy on land,” says Habeck.

The Federal Government is working together with the German Air Traffic Control Service to improve the expansion of wind energy in Germany. In addition, it should also be in line with the interests of German radio navigation systems.

In addition, air traffic control had already approved 41 applications for the installation of a total of 119 wind turbines in the system protection areas of rotary radio beacons last year.

In order to ensure the trouble-free operation of the air traffic control systems and also to make more area available for wind on land, the Federal Government is working closely with the Physikalisch-Technische Bundesanstalt.

This is what is meant by rotating radio beacons

Radio navigation systems are ground stations that enable aircraft to navigate via radio signals. They also include rotating radio beacons. In aircraft, their signals are also processed in receivers and made available as direction information.

In Germany, the German air traffic control currently operates 52 rotary radio beacons, of which the federal government wants to dismantle a total of 19 by 2030. In the future, aircraft will be mainly navigated by satellites.

The federal government has also set itself the goal of doubling electricity from renewable energies by 2030. The “Wind-on-Land-Gesetz” is also intended to significantly accelerate the expansion of wind energy in Germany.

The Bundestag and Bundesrat passed the law last July. It will come into effect on February 1, 2023.