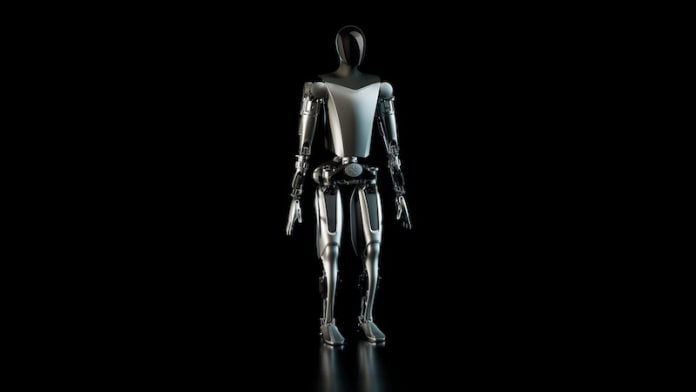 Elon Musk has presented the first prototype of the humanoid robot “Optimus”. He predicts that Tesla will be able to take the first orders in three to five years. Then the e-car maker could produce millions of Tesla Bots at a unit price of around 20,000 US dollars.

On Friday, September 30, 2022, Tesla CEO Elon Musk presented the first prototype of the humanoid robot “Optimus”. During the presentation at the Tesla office in Palo Alto, California, the test robot took its first unsteady steps and waved to the audience.

The company also shared a video of the Optimus “performing simple tasks like watering plants, carrying crates and lifting metal bars at a production station at the company’s California facility.” That comes from a report by the news agency Reuters out.

Accordingly, the electric car manufacturer wants to build up a second mainstay in the areas of robotics and artificial intelligence in addition to its main business. Meanwhile, Elon Musk said he expects the company to be able to start taking orders for the Tesla Bot in around three to five years.

From then on, the US group would theoretically be able to produce millions of copies – at a unit price of around 20,000 US dollars. That corresponds to around a third of the current price of the Model Y. Musk even assumes that Tesla can achieve higher sales with its robots than with its electric cars.

There is still a lot to be done to refine and prove Optimus. I think Optimus will be amazing in five or ten years, downright stunning.

Optimus: This is Tesla’s humanoid robot

According to Tesla, the prototype of the Optimus was already produced in February 2022. The test robot reportedly weighs around 73 kilograms. For the next generation, the electric car maker wants to install a 2.3 kWh battery, a chip system and actuators in the robot’s body to power the limbs.

Then the humanoid robot will also be used in the company’s factories. Musk also said that the mass-market launch of the Optimus has the potential to “transform civilization” and create a “future of plenty and poverty.”

When the Optimus was announced in May 2021, Tesla was mocked when the company put a person in a costume for presentation purposes. This time the reactions were far more positive. Numerous experts were also enthusiastic about the speed and development of the Tesla Bot.

For example, Christian Hubicki, a robotics professor at Florida State University, tweeted that Tesla “came a long way in about a year.” However, he also wrote that the functions shown were merely standard “but not stunning” for a humanoid robot.

My take:
1. Impressed by the short turnaround to build a new humanoid robot and show it live. Hats off to the team.
2. The shown capability seems standard (but not mind-blowing) for humanoids.
3. Zero idea on the reliability.
4. I’ll believe the price when my lab buys one.

Jonathan Aitken, a roboticist and lecturer at the University of Sheffield in the UK, spoke opposite The Verge, from an “interesting demonstration”. However, he noted that there are still many unanswered questions about the robot’s capabilities. He pointed out, for example, that the Optimus videos showed an “umbilical cord”.